The holidays really are so much more fun with kids. I've always heard that but it's one of those things that you can't really understand until you do have those kids with you on the holidays.

Since graduating from junior high (is that too old to trick or treat?) Halloween has always just been another day, no big deal made about it, no dressing up, just October 31st.

But this year it was SO fun. Although I had no idea that Halloween festivities would take up the whole week of Halloween! Seems like we had something everyday. What will Christmas be like? Something everyday for the whole month??

Anyways, back in September I asked Eli what he wanted to be for Halloween and he said a gorilla. Well....ok. Thinking that he didn't understand the question I waited a couple of days to ask him..... and he said he wanted to be a gorilla again. He was very insistent on this, so I sought out for a gorilla costume

And lo and behold I found one at TJ Maxx of all places. And it was the perfect gorilla costume! Because of Eli's costume choice, Annie's costume came naturally; a banana. 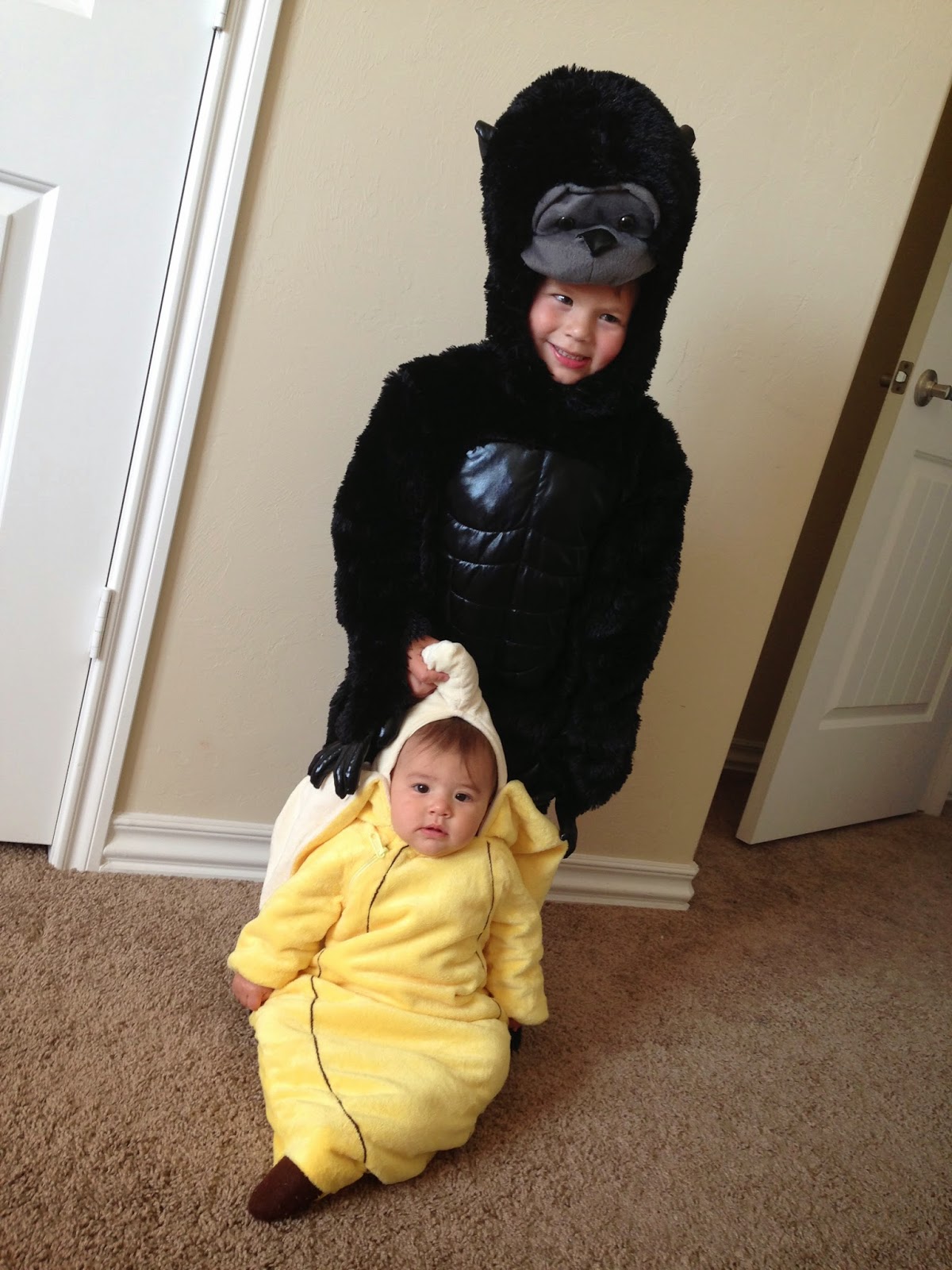 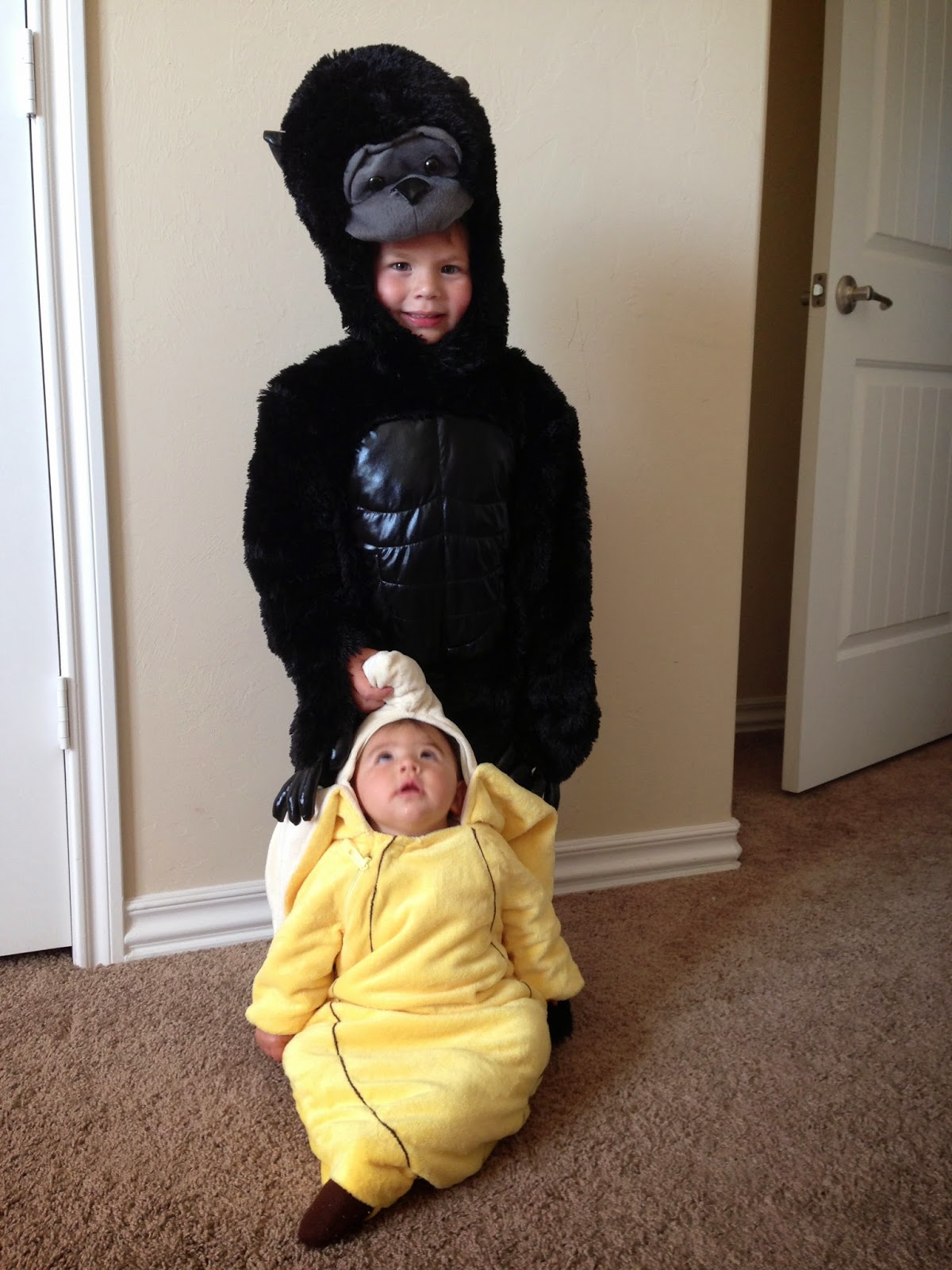 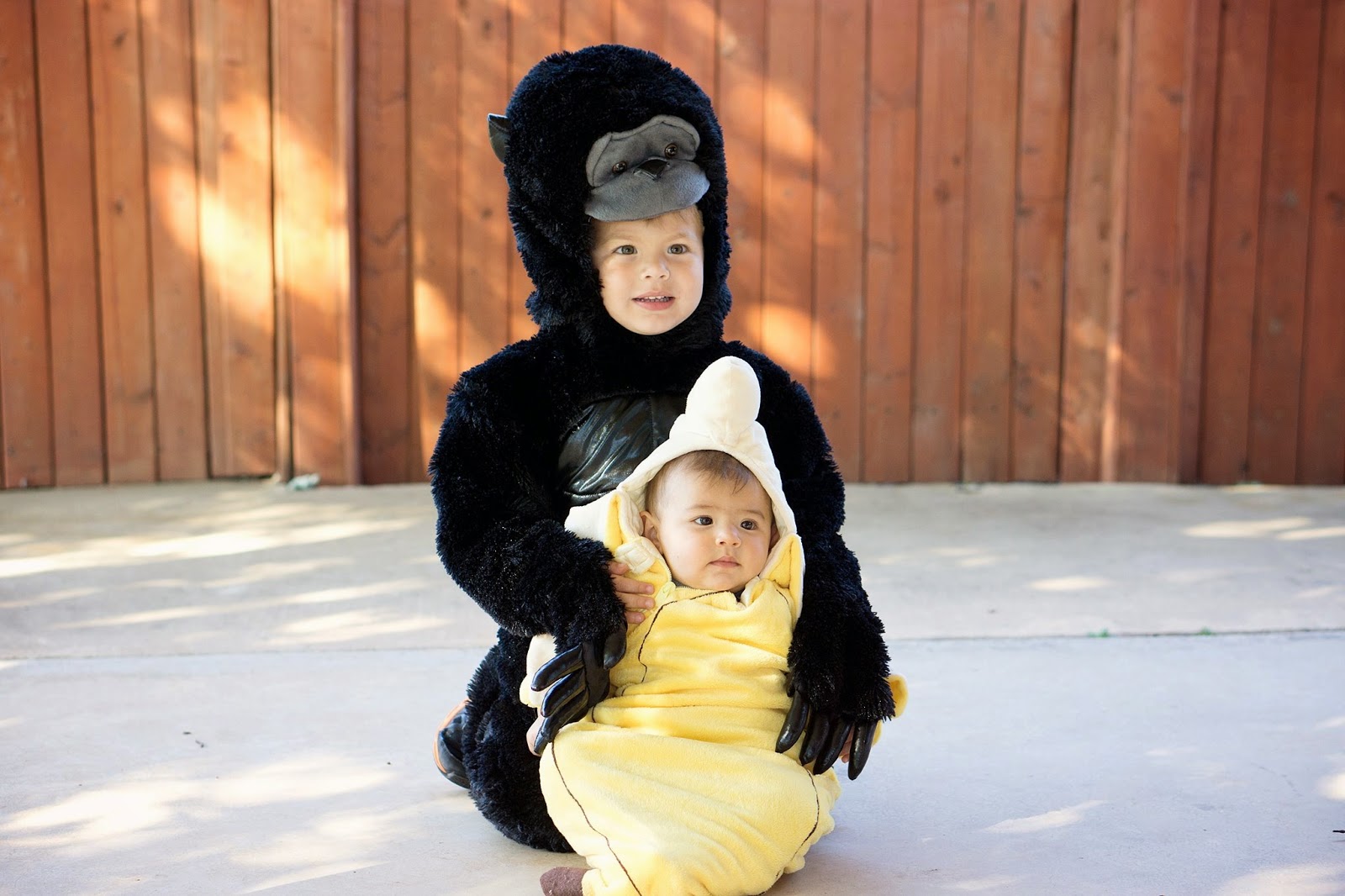 As could be expected Annie was not a fan of the banana costume,  but she was a trooper each time she wore it.

Halloween morning we woke up and went to our favorite donut shop. They were giving a free Halloween donut to all kiddos dressed in a costume. We will never pass up a free donut. 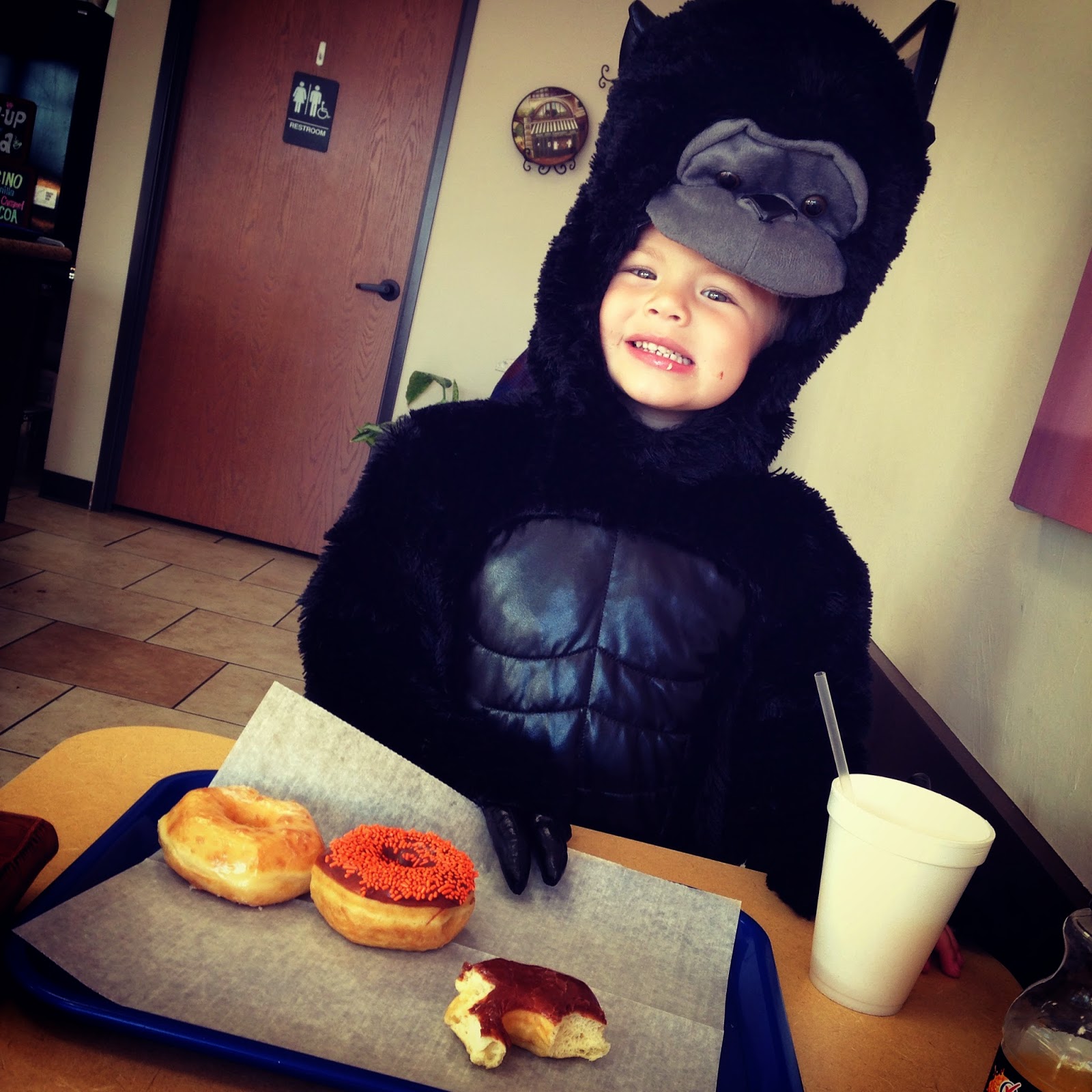 The donut shop is close to Luke's work so we took a box of donuts to his office which allowed us to show them Eli and Annie in their costumes. Everybody is a fan of a gorilla and banana.

That evening we had our annual Trunk or Treat at church. Each car is responsible for coming up with a game. This year we did a banana toss game - I was very proud of myself for sticking to a theme, something I'm not usually good at. I usually throw something together at the last minute. Actually I did throw this together at the last minute, it was just an easy theme to stick with. 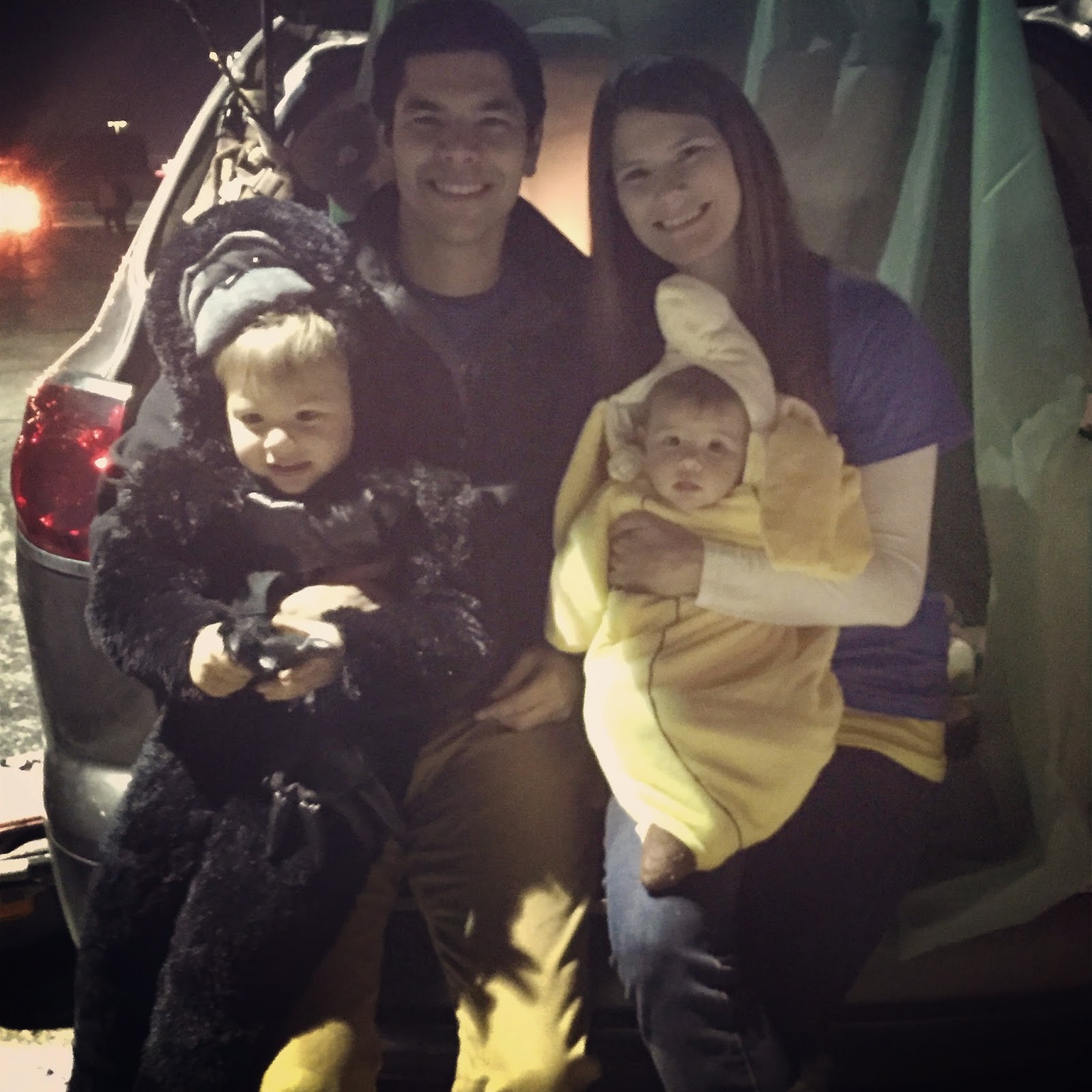 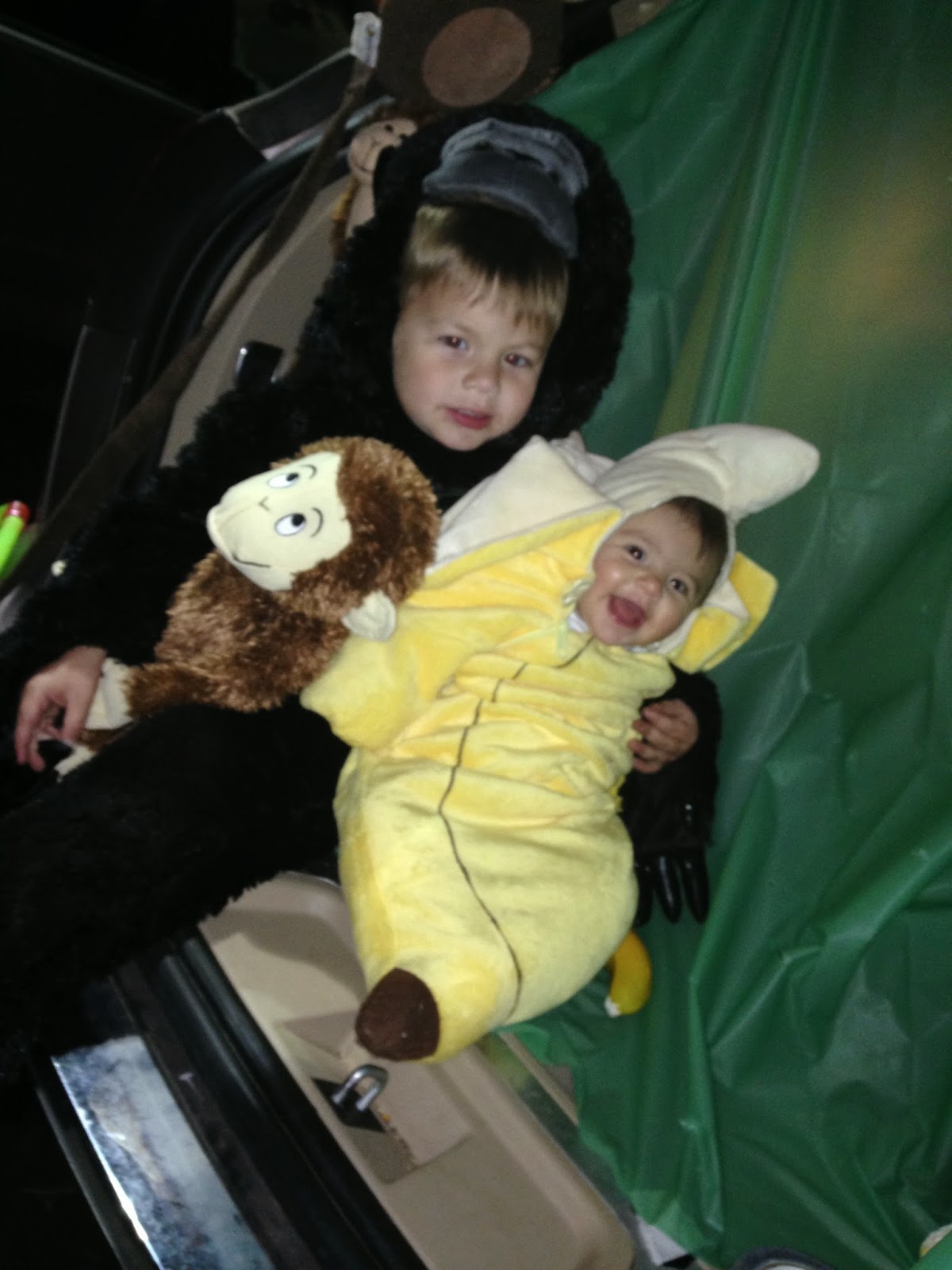 And our game sounds a lot more put together than it actually was. I noticed a couple of days before Halloween that my trunk would slowly close on it's own ending with a big BANG as it picked up momentum and slammed shut. I noticed this when it almost took off my head once or five times.

I then forgot about it. Until we were at trunk or treat. An event that requires us to leave our trunk open for two hours. So we spent the next two hours wrestling our children while dealing with several hundred kids stopping by our trunk, and holding open the trunk door. And by we I mean mainly Luke. He has now asked me to mention all car problems to him in a timely manner.

And he did! We stopped by a few of our friend's houses and each time we left he would say "Ok let's go to another house that was fun!". Luke and Annie stayed at home so it was just me and Eli, and it was so special.

Then we came home, ate dinner and went to bed. We were all so tired!

It was such a great day and night. I can't believe October is already over, looking forward to November!