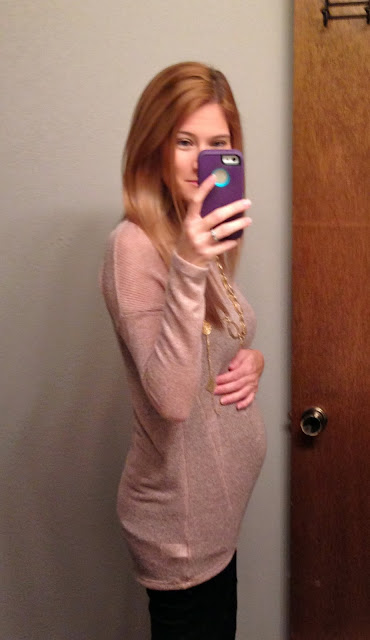 How Far Along: 16 weeks - My last update I did just last week was 14 weeks - well this week I had an unexpected ultrasound (more on that below) and I'm actually measuring at 16 weeks. So I'm just going to adjust it on here and 15 weeks just disappeared into thin air.
Total Weight Gain/Loss: I think around 5 lbs.....(give or take 10 lbs)
Maternity Clothes: Still can't find my maternity jeans and I looked in just about every box this week. So I pulled the plug and bought some more. I ordered them online so I'm anxiously awaiting their arrival.
Gender: Ok get ready this is long..........

On Friday afternoon I had some bleeding. It wasn't a ton of bleeding but enough that I was definitely alarmed. My doctor's office is closed Friday so I called the on call number and my doctor called me back immediately. She wanted me to go in for an ultrasound ASAP and made me an appointment. My appointment was about 30 minutes after I talked to the doctor and Eli was asleep. I didn't want to wake him up so I called Luke and asked if he could come work from home while I went to the appointment. I really felt like nothing was wrong with the baby and I would be ok going by myself to the ultrasound. Luke asked me 8 million times if I was really ok going alone but for me it was more important for Eli to nap. If you've ever mothered a 2 year old you understand where I'm coming from in this.

When I got to the radiology place they told me that their machine was broken and it could take a couple of minutes to fix. An hour and 15 minutes later they called me back. I hadn't had anymore bleeding and was still pretty calm at this point. And I was so glad I was alone. No way Eli could have sat with me in the waiting room that whole time.

The ultrasound tech got me all set up and started looking around in my belly (so crazy). He immediately got the heartbeat and said everything looked great with the baby. It was doing great. So this is when I took my chance....I said "welllllllll can you see the gender?"

And he said he very clearly could see it....and then told me what it was.

Considering we are in a day and age of huge gender reveal parties, colored cakes and balloons popping out of boxes it was the most anti-climatic "gender reveal' ever. Just me and the sweet ole ultrasound tech who watched me wipe away tears with my belly exposed and told me I was going to be a great mom....clearly trying to cut the awkwardness I am so great at creating.

I waited till I got home from the office to tell Luke, I didn't want to tell him on the phone. I was also able to show him a ton of pics the ultrasound tech took and put on a disc for us.

So we now know the gender. I think I'm going to wait till our "official" visit with my own doctor when they do the anatomy scan and check the gender before we announce. But I may change my mind. We'll see.

Name: We are 90% sure we have decided on a name. It's just so hard to commit to a name, it's kind of a big deal, but I love it and as soon as I saw that baby on the ultrasound this name came to me. I told Luke about it immediately and he loved it. Pretty sure it's the one.

Movement: Still haven't felt the baby yet. When I saw the ultrasound it was moving around all in there, just not big enough for me to feel yet!

Sleep: It's going pretty good so far. I sort of want one of those Bump Nest body pillows. Has anybody used one? They truly look magical.

What I miss: I sort of miss Chick Fila. But not really.

Cravings: Still craving all things sour. ALL THINGS SOUR. It's weird. And my tongue is raw.

Best Moment this week: Finding out the gender! Woo hoo!

With Eli and Now with Baby Tree #2: 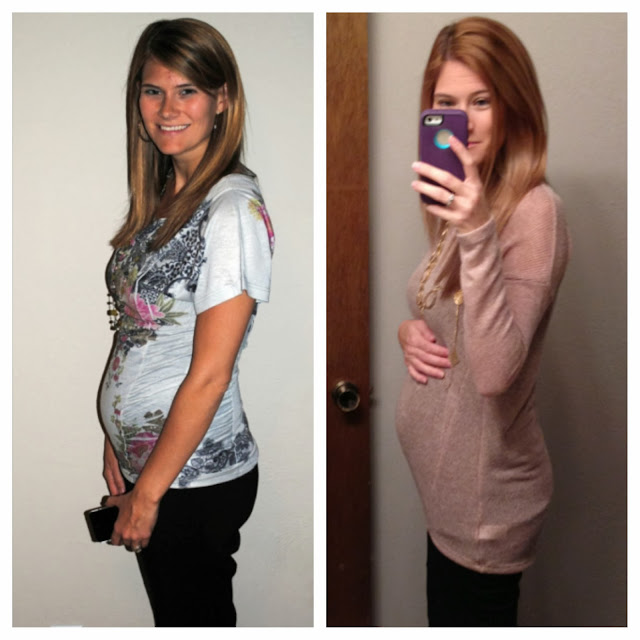